I finished recording the next episode behold - I see that Apple Podcasts has picked us up! Click the pic below to open Apple Podcasts... 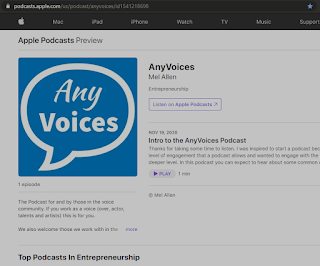 That was fast! In Episode 1, I talk a little bit about myself - which is not how I want this podcast to go. So I need your help - drop suggestions in the comments of people others in the voice over and acting community should hear from. Here are some suggestions to get you thinking...

Okay, welcome back to the AnyVoices Podcast. I'm your host The Real Voice Mel Allen and in today,'s episode, I thought maybe tell you a little bit about me. So, no real links or resources today, except the default link that I'll put into my website therealvoice.com.

So how did I get started in voiceovers? Well, it all kind of started in 1987 when I was a kid and I was having a discussion about music with some friends of mine at a summer program that happened to be at Johnson State College, now known as Northwestern University, and one of our counselors overheard us talking, and said, “Hey you guys want to be on the radio?”, because it happened that he was the General Manager for the radio station on the college campus. So he taught us what we needed to do. We ended up being on the radio show about a week or two later and... everybody froze when it came time for us to talk. I just remember the golden rule that he told us was ‘no dead air’, so after about three seconds (or what felt like an eternity) I jumped up talked into the microphone. I don't even remember what I said and played the next record because actually, they were still on records there at that radio station.

So how did that lead to me being in voice overs? Well after a couple of weeks more of being on the radio, it ended up being me and one friend of mine. I think another friend came in every once in a while, but mainly it was my friend and I. I got a little more comfortable behind the microphone and the general manager asked me if I could actually record all of the underwriting all of the sponsorships and the PSA’s and the station identification. Because, he said, “people have a really hard time playing it, so if you just record all of them”, he's like “all they've got to do is hit a button and these will play”, and I said, “Sure I’m happy to do it!”. It was awful. It was awful. I didn't get paid for it, but they taught me how to use all the equipment, and that basically started me down the line of learning how to do production and learning how to do voiceovers. So over the next year or so, I actually reached out to some friends of mine, from out of state, and I said, “Hey send me some tapes of the radio station. Just record one of the biggest radio stations in your area and send me the tapes”. And so I sent the money for postage and tapes and they sent me tapes. I listened to those and skipped all the music at first (I ended up going back later and enjoying it) but what I was looking for were the commercials how they were read and so I typed out the scripts and I used to try to emulate the voices that I thought did a really good job of doing their voice over and so that was how I basically started.

In 1994 I got hired in an actual radio station called 95 Triple X, and they are still in the Burlington, Vermont area where I’m from, so I learned how to do real production there on much better quality equipment. Although, at the time, a lot of it was analog. But I was there while everything went digital - so that was 1994 by 1996. I actually had my first paid client, not a radio station not an employer who was paying me (who was getting basically free voiceovers from me). So 1996 a prior co-worker, that I’d worked with in radio, said, “Hey we've got this person who'll pay you 20 bucks!” So I ended up doing a lot more voice overs for them. I ended up making a lot more than 20 dollars.

Over the years I have been a production director, I’ve been a producer of radio programs and production director for several... several radio stations. I also wrote and produced commercials for television and in addition to that - I kind of supported my career in radio and voice over because it… back then I didn't make a lot of money. I think I maybe was making 75 to 100 for some of my top billing gigs. In 2006 I really kind of ‘went out on my own’. I registered the domain therealvoice.com. I actually had two other people who were with me, who we also co-wrote, co-produced, and did voiceovers for things.

So The Real Voice was a three-person crew. Two other women who were there with me - who were working on it - and we had clients we were doing imaging production. We were doing radio production. We were writing scripts that were making it on to TV. And then I ended up actually working for a facility that makes demos and teaches people how to do voice-overs, so I was a coach, I was a salesperson, I was a manager for the demo production department. I brought them into more modern ways of doing demos they were doing things that sounded date. That was a great experience when I worked with a lot of clients, taught them how to read scripts, basically how to look at scripts in many different ways, and to really be able to deliver things. And those were skills that I actually learned working with clients in radio. People would come in, we'd have half an hour to maybe 45 minutes to record because that would give me enough time so that I could actually quickly edit together their commercial, give them a quick listen to see how it was going to sound and, have any problems, we could re-record a portion of it. So I learned very quickly how to get a decent recording out of people and so, working with people who actually had an interest in voice over or voice acting, putting a script, putting some copy in front of them, and giving them some tips on how to do it and was also doing webinars. So I used to do a lot of webinars about every... every month to two months. I was part of a rotating cast of people doing webinars. Teaching people how to do this, and while I didn't feel really fulfilled by that...- I have done some coaching after that... but what I really love doing is just kind of getting people fired up about this. I’m passionate about it! I love doing voice overs. I've been working with some of the same clients for dozens of years. I've got people who still refer and recommend me to people and... and I just love that I've built this whole kind of relationship network with a group of people. And that now that everything has gone digital, I also have a lot of people who are other voice over talent that I've connected with in this, and to me, it's just really something that I love. I want to grow and want to help other people because... along all of that way. I've learned a lot about how to record yourself, about equipment, about audio editing and I've done different characters. So I've done characters for some radio and commercial spots. I've done characters for children's books that I've read. So I've done acting both behind the camera… both in front of the camera. I've been directing and producing behind the camera. I've been on the other side of the camera where I was a character. I've also done voice over acting. So a lot of different varied background that I've got, over many years, and I've enjoyed it all. I really absolutely love creating. I love helping other people to be passionate about creating and I want to help you create. Whether you're starting, kind of like I was where I was recording in my closet, and my first “booth” was literally boxes around my microphone that were stuffed with pillows on top of a desk. I still have that desk, by the way, my grandfather gave it to me. So whenever I look at that, I think about how I had boxes stuffed with pillows stacked all over that and that was how I first recorded.. holding up a quilt over my head with just enough light so that I could see my copy… But it's definitely something that I want to help other people do. I want to help other people do better and I want your questions.

So if you head over to AnyVoices.com you can comment. Also if you want to find us on social media @Any_Voices on Twitter, AnyVoices.IG on Instagram, AnyVoices.FB on Facebook and, of course, again our website AnyVoices.com. I say ‘our’ because I don't feel like it's mine. I feel like this is a community that I want to talk to.. that I want to help amplify other people's voices. I don't want it to just be mine. I want to have interviews with other people. If you have a suggestion for an interview, drop me a line and let me know who you think that we should talk to. Somebody who's got a novel approach, a novel way of solving a problem that you've had... that other people have had. If you have a burning question, let me know that too and I would be happy to answer that.

Thanks for tuning in and hopefully this will be on apple podcast very soon so it will trickle out to other places you can listen to it on anchor you can listen to it on Spotify pocket casts also has it as of this recording and soon I expect it to be in more places oh I’m putting it on YouTube as well the YouTube link right now is long, because I don't have many subscribers, but the link to that is at AnyVoices.com as well.

Thanks for letting me share a little bit about myself and again I don't want this to be all about me. I definitely have a lot of experience over the years, that I expect that I will be sharing more of, but again... I want to be here to amplify your voices, and to make sure that we're getting your novel approaches, new challenges, new solutions out into the world. So thanks very much for tuning in and if you do find this on your favorite podcasting platform give us a review. Leave us those five stars. If you're not ready to give us five stars, l contact me and help me understand why and how we can earn that review from you. Again, AnyVoices.com is our website so that's the main hub where you can find any links to everything. Thanks for listening to AnyVoices the Podcast and... how am I going to end this? I guess I'll say... “Let's do one more take!” So until next time, this is Mel Allen for the AnyVoices Podcast 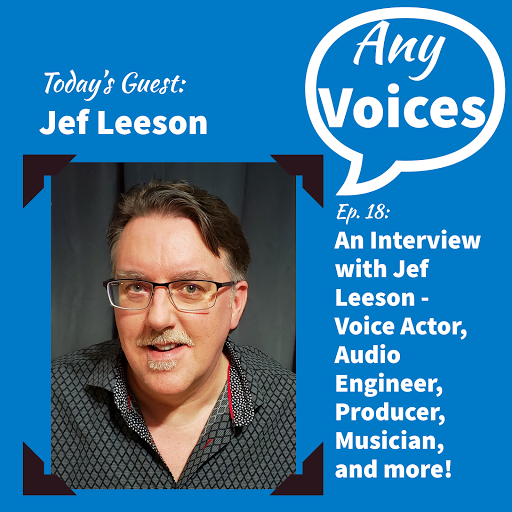 AnyVoices Episode 18 - Jef Leeson Voice Actor and so much more! 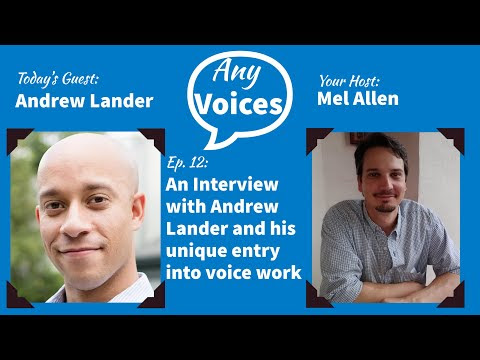